Transenter won the LT-Innovate Award 2014 for Lingosec during the Language Technology Innovation Summit (LT-Innovate 2014) in Brussels.

Along with 23 other companies, Transenter was nominated for the LT-Innovate Showcases & Awards. Transenter presented its new Sensitive Content Protection Software, Lingosec, which minimises the risks of information leaks and economic espionage in the process of machine and human translation. (www.lingosec.com)

Lingosec finished second and was one of the six companies to receive the LT-Innovate Award 2014. For more information about the winners: LT-Innovate AWARD WINNERS. 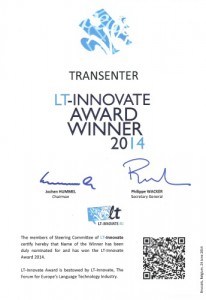 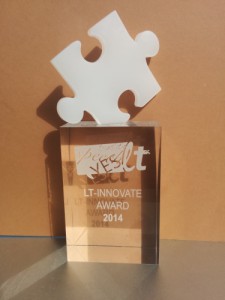 Transenter has an EN 15038 certification, which is one way for you to know that we offer quality translations.

EN 15038 contains rigid standards specific to the language services industry that guarantees an established process and a standardised approach.

For more information on the EN 15038 standard see:

Get A Free Quote